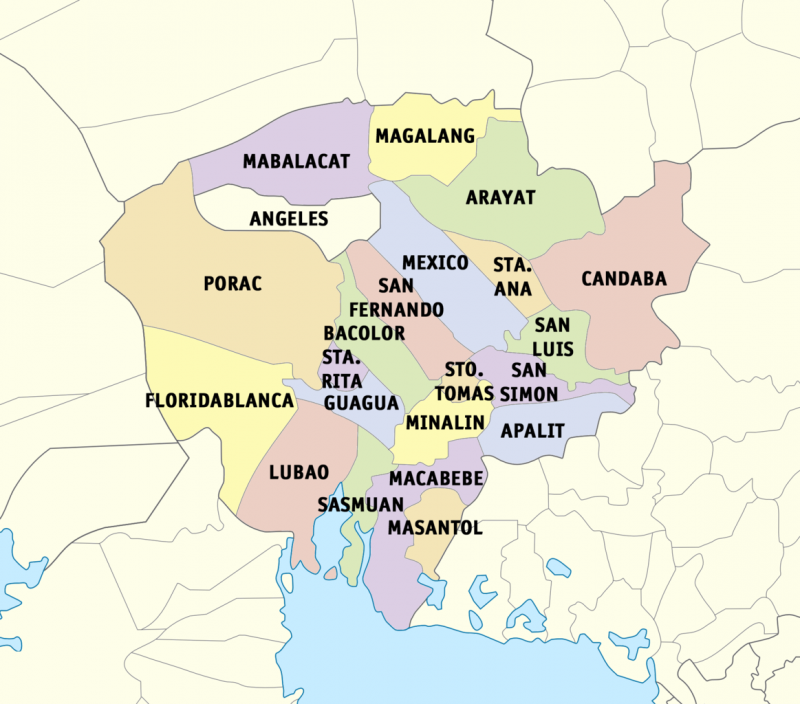 Pampanga’s creation in 1571 made it the first Spanish province in Luzon. Cebu was the first province in the Visayas founded in 1565. Also, La Pampanga served as the archipelago’s capital from 1762 to 1754 during the British invasion of Manila.

The province of Nueva Ecija borders the northern part while Bataan and Zambales on the southwestern and western regions, respectively, and Bulacan on the eastern and southeastern parts. It opens up to Manila Bay as seen on the map of Pampanga.

Pampanga serves as the home to two Philippine Air Force bases namely Clark Air Base and Basa Air Base in Angeles City and Floridablanca, respectively. Angeles City is geographically within Pampanga province, but it has an independent government being a highly urbanized and first-class city.

Located in Central Luzon, it was the Spaniards who gave Pampanga its name La Pampanga upon discovering natives living near the riverbanks of the largest river during that time, Indung Kapampangan River. Its name originates from the term pangpang or pampang which means riverbank. Nothing is more suitable than its name since Pampanga is a flat province that is crisscrossed by hundreds of small lakes flowing and leading to the Pampanga River.

Pampanga is composed of 20 municipalities and 3 cities (2 component cities and 1 independent, highly urbanized city). Here is a political map of Pampanga, Philippines.

Physically, Pampanga’s total land mass is 206,247 hectares. Pampanga, Philippines has a relatively flat terrain save for its rivers and mountains in the northeastern and northwestern sides. Among the municipalities, Porac has the largest land mass (314 km2) followed by Candaba (176 km2) and Floridablanca (175 km2). Santo Tomas has the smallest land mass (21 km2).

The wet season begins in May and ends in October, and the rest is considered dry season. The warmest months are March and April while the coolest months are December, January and February.

Pampangueños are well-known for their chivalry and leadership abilities while the Pampangueñas are popular for their beauty and culinary skills.

Some of the most notable Kapampangans are:

These famous Kapampangans all come from different locations that you can find on the map of Pampanga. They all possess various abilities and skills making their kin proud for bringing honor to the province.

The entire Pampanga was placed under the influences of the Catholic Church during the Spanish colonization. Majority of the festivals and observances are somehow connected with Catholicism. The influence is even more pronounced during the Lenten season wherein different barangays from the map of San Fernando, Pampanga and other municipalities hold processions and other religious festivities.

Pampanga’s main industries are farming and fishing. The major products are rice, corn, sugarcane, and tilapia.

Other cottage industries such as wood carving, furniture-making, guitar-making, and handicraft are thriving in Pampanga. Specifically, the province is best known for its handcrafted lighted lanterns (parols). Gradually, Pampanga, Philippines is also becoming popular for its casket and all-purpose vehicle manufacturing industries.

Pampanga’s culinary industry deserves a category of its own. Pampanga is also a home for some of the most popular culinary creations. Such creations include specialty foods and native delicacies, ranging from ordinary to exotic such as betute tugak (stuffed frog) and adobong Camaru (mole crickets).

Not to mention, the place is also the go-to destination for processed meat cravings. Two of the well-loved brands nationwide hail from the province. These are Pampanga’s Best and Mekeni Food. They are famous for their tocino, tapa, hotdogs, and longganisa (Philippine-style sausage).

Other developing industries are found in the Clark Freeport. An example of these industries is the semiconductor manufacturing industry. Other budding investments focus on aviation-related sectors and light to medium technologies.

Foreign direct investments are also encouraged in the Clark Special Economic Zone. Utilities including telecommunication, water, electricity, and transportation extensively cover the entire Pampanga province. These are readily available and accessible for businesses and industries.

In Pampanga, Philippines, there are 17 international schools, 66 colleges, and universities and more than a hundred primary and secondary schools. Some of the well-known schools are University of the Assumption, Don Bosco Academy, Chevalier School, Mary Help of Christian School and Republic Central Colleges.

There are also technical and vocational schools and trade learning centers.

Pampangueños are known for specific crafts. They are superb goldsmiths and jewelers. There are also highly-skilled woodcarvers and furniture-makers. Filipino families buy and keep antique pieces of jewelry and furniture pieces as heirlooms.

Nationwide, the Kapampangans are known for their excellent cooking skills. The Pampangan cuisine is both sumptuous and exotic.

Tourism is an ever-growing industry, especially after the 1991 Mount Pinatubo eruption. The tourist spots in the map of San Fernando, Pampanga and other municipalities include heritage churches and shrines, historical landmarks and natural parks.

Of these, St. James the Apostle Church and Sta. Monica Church are considered as national cultural treasures. San Agustin Church, which also happens to be the oldest church in Pampanga, Philippines is regarded as a national historic landmark. Churches in Angeles, Apalit, Bacolor, and Betis are known for their colonial church architecture.

A map of Pampanga serves as a guide towards the historical landmarks in Angeles City, San Fernando, and other municipalities. Taking time to see of all of these national treasures preserves not only the Kapampangan heritage but also the local culture and history.

In Pampanga, Philippines, all months feature a festival or more. For one, each of the city or municipality celebrates a fiesta in honor of its patron saint.

The province of Pampanga offers a myriad of lifestyle choices for settlers and travelers. Whether it is immersing taste buds to the local delicacies, exploring business opportunities or trying out indoor and outdoor activities, each of the cities and municipalities in Pampanga guarantees a unique experience.